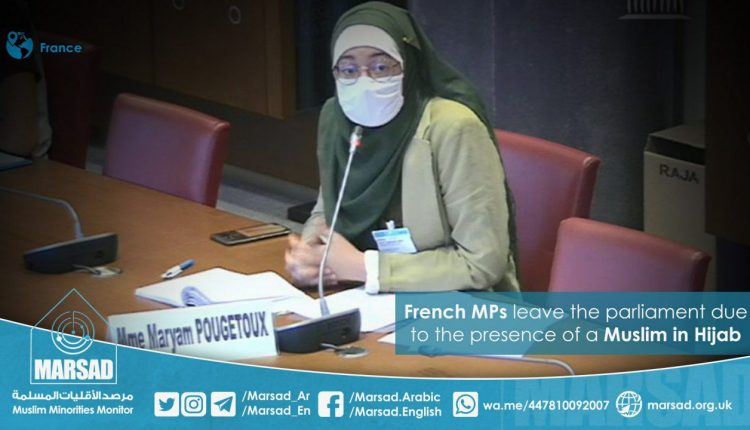 Right-wing and republican lawmakers walked out of a meeting in France’s parliament Thursday due to the presence of a woman wearing a Muslim headscarf.

During the meeting in #Paris, which was discussing the COVID19 pandemic and its effects on young people, some right-wing members of parliament as well as ruling party member Anne-Christine Lang said they could not accept that students’ union representative Maryam Pougetoux was wearing a headscarf and left.

Lang argued on Twitter that she could not digest the presence of a person with a headscarf at a meeting held at the national assembly, “the heart of democracy.”

“As a member of parliament who is a feminist and protector of women’s rights, committed to republican values and secularism, I cannot accept the participation of a person wearing a headscarf to our meeting,” she said.

Another ruling party member, Sandrine Morch, who chaired the session, said the lawmakers’ reaction was unnecessary and there was no rule preventing people from attending the meeting in religious attire.

Morch noted that she would not allow the fake discussion around the headscarf to shift the focus of the meeting, where the future of the country’s youth was being discussed.

Pougetoux was also exposed to criticism by then-Minister of State for Gender Equality Marlene Schiappa and many other political figures when she was appointed as the speaker by the students’ union UNEF in 2018.