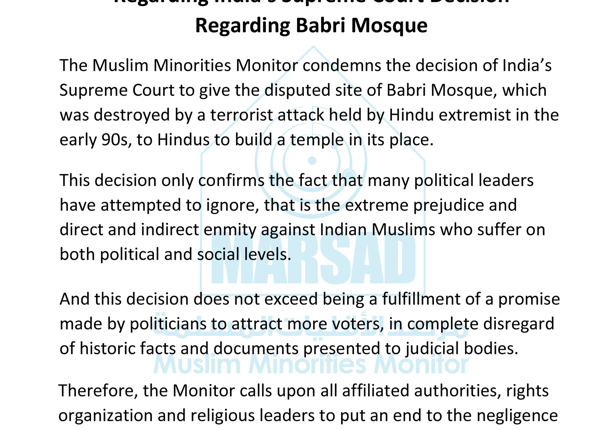 The Muslim Minorities Monitor condemns the decision of India’s Supreme Court to give the disputed site of Babri Mosque, which was destroyed by a terrorist attack held by Hindu extremist in the early 90s, to Hindus to build a temple in its place.

This decision only confirms the fact that many political leaders have attempted to ignore, that is the extreme prejudice and direct and indirect enmity against Indian Muslims who suffer on both political and social levels.

And this decision does not exceed being a fulfilment of a promise made by politicians to attract more voters, in complete disregard of historic facts and documents presented to judicial bodies.

Therefore, the Monitor calls upon all affiliated authorities, rights organisation and religious leaders to put an end to the negligence of the issues of the Muslim Minority in India and to stop the building of the Hindu temple in a historic Islamic site and to call for the protection and rebuilding of Islamic historic sites in India.